The results of the BlindFaith project are published at the 15th International Conference on Computers Helping People with Special Needs – ICCHP´16. The ICCHP is a mayor, international recognized venue for research in the domain of people with special needs. The conference took place from July, 13 to 15, in Linz, Austria. The paper “Insights Into Internet Privacy For Visually Impaired And Blind People” by Georg Regal, Elke Mattheiss, Marc Busch and Manfred Tscheligi was presented in the Special Thematic Session on Accessibility of Web and Graphics. Details can be found in the conference program. The complete proceedings can be downloaded from the ICCHP´16 website.

To promote the results of the BlindFaith project, we presented the information material at a “smartphone meeting” in March organized by the Hilfsgemeinschaft. We explained the topic internet privacy to visually imapired participants and discussed possibilities to protect ones privacy.

In summer we conducted two workshops with ten visually impaired and blind internet users to create a first draft of an interaction design for a browser-based privacy-enhancing tool, which allows blocking trackers.

The created interaction designs (in the form of as HTML prototypes) will be evaluated with ten user tests and compared to the existing tool Ghostery. Based on the evaluation results, we will revise the interaction-concepts and derive general design guidelines.

We created an online survey, to gather feedback about the comprehensibility of the information material compiled in BlindFaith regarding “accessible internet privacy”.

The survey takes about 20 minutes and all participants completing it until November 13 have the chance to win a 20 Euro Amazon voucher. Thank you very much in advance for your help!

The feedback will be used to improve the information material and adjust it to the needs of visually impaired and blind internet users.

Since 2006 the A-TAG, hosted by  “Verein Accessible Media”, is the meeting point for topics regarding internet-accessibility in Austria. At A-TAG 2015 BlindFaith will be presented to the interested audience. We will present the insights gathered in the requirements analysis, the developed design guidelines, and the interaction and feedback design for the accessible tracking blocker.

Information regarding the program can be found here: http://atag.accessiblemedia.at/#nav-speakers (in German).

There is an article about BlindFaith in “The 2015 Book” of AIT Austrian Institute of Technology.

Here is the link to the article.

On July 7, BlindFaith was presented by Elke Mattheiss to an interested audience at the am IKT-Forum. 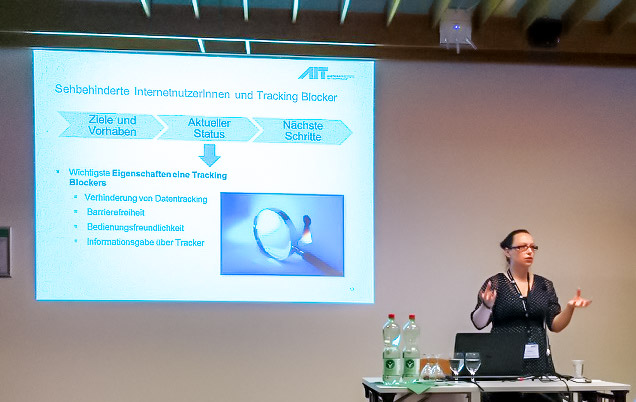 The presentation (in German) can be downloaded here: BlindFaith Presentation at the IKT-Forum

Today we will present the project BlindFaith at the IKT-Forum in Linz and discuss the project with a broad audience from research, development, theory and practise.

We hope to get in touch with interesting people and find synergies between BlindFaith and other projects.

Based on the requirements analysis we have drawn the following design implications for an accessible tracking blocker:

The workshops have shown that privacy concerns and protection of internet privacy are an important topic for visually impaired and blind users. However, the workshop participants had little to no experience with privacy protecting tools. The threat of behavioral analysis and targeting is known by the participants and considered as a threat with medium severity. Due to their visual impairment it was considered as more difficult to recognize threats on the internet. Participants stated that this results in a more careful behavior while browsing the internet. Regarding the accessible tracking blocker participants stated, that the tool must be completely accessible and easy to configure, to enable the users to decide which trackers are blocked and which are not.

Observations of users trying out a tracking blocker and interviews with ten blind and visually impaired internet users were conducted. The interviews confirmed the impressions gathered during the workshops, that privacy threats are known by experienced blind and visually impaired internet users. Tracking and collection of personal data were often mentioned as threats in the interviews. Providing too much (or unwanted) information on the internet was one of the major concerns of the interviewees. When asked explicitly about collection of personal data, participants stated that they are well aware that data is collected, but no one used tools for protection.

The analysis of the laddering interview shows, that accessibility is a major quality a tracking blocker should have. Values that are important are protection of personal privacy, control, equality of opportunities and self-determination. A tool for blocking data collection should consider these values.

As half of project time is almost over, the current status of the projects was presented on April 21 at the netidee Spring Talk 2015. The progress reports and the subsequent networking gave a good overview about the running projects and possible synergies between BlindFaith and other projects about accessibility for blind and visually impaired users (Nearspeak) and tracking blockers (upribox).
Link to the netIdee Spring Talk 2015

We are happy that BlindFaith was mentioned among other projects in an article about the event by the Austrian daily news paper “Der Standard”.
Link to the arcticle “Halftime at netidee: Privacy-box, encryption and anti-terror law (in German)

In the April issue of the magazine “Sichtweisen” an article about the goals and current activities in the BlindFaith Project was released.

On February 17 and 19 two workshops with altogether 11 blind and visually impaired internet users have taken place at the premises of the Hilfsgemeinschaft.

In these workshops we discussed the following questions with the users:

The results of the workshops are currently analysed and provide a strong basis for further steps of the requirements analysis. As a next step we will conduct behaviour observations and individual interviews. In strong cooperation with the users we will evaluate existing privacy enhancing tools and check their accessibility.

We looked into the accessibility of existing Privacy Enhancing Tool, to use them later in our user behaviour study. We focused on tracking blocker tools that block beacons, trackers, cookies, etc. and thus prevent behavioural analysis and behavioural targeting.

Our analysis showed that Ghostery is the most accessible tool. Thus Ghostery will be used for demonstration in the requirements analysis and user behaviour study.

The following table provides an overview of the analysed tools:

On December 3 the project kick-off-meeting of BlindFaith took place. Elke Mattheiss and Georg Regal from AIT as well as Klaus Höckner and Daniele Marano from the Hilfsgemeinschaft got together to shape the project goals and plan first steps towards them.

First an intense analysis of existing privacy enhancing tools will be carried out, with special focus on accessibility and usability. In the requirements analysis phase a workshop as well as interviews and behavioural observations will be conducted with blind and visually impaired users. Within the workshop and interviews first needs and concerns of the target group are collected. 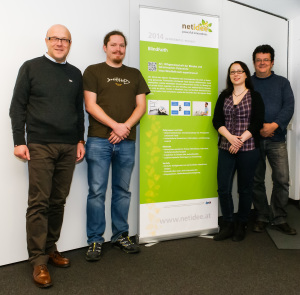 The winners of the 9th netidee call were presented on November 20 at the Viennese “Museumsquartier”. Of course BlindFaith was present as well and used the opportunity for presenting the project to the public. Moreover it was very interesting to get to know the other founded projects and engage in interesting discussions.

A successful event, that motivated us to dive into project work! 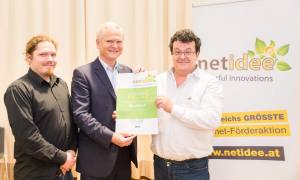